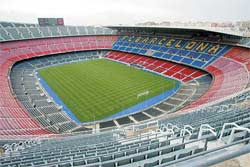 After a recharging night, we took our Audi for a spin and went thru the Spaniard major highway to Barcelona.

Once we reached the address to Pauline’s home, she was waiting for us with her usual beaming smile. She is a fun and funky little dynamo who is a party animal! We all loved her to death. She needed to do some last minute grocery shopping, so we tag along with her. One thing you should know is that it is not like going to the supermarket, everything here is fresh and totally has that homemade feel. We went to a slaughterhouse where we pick our pieces of meat and spicy chorizo, who happens to be like a german hotdog but inside has paprika and other spices and bits of havanero pepper which adds the spicyness! Then we went to a flea-market looking place where we got the condiments, lettuces, tomatoes, parsley, spinach, and avocados. Everything was super fresh. We passed thru this area where they have the cheeses, and you can see the rolls of cheddar, pecorino and parmesan cheese, the scent is mouth watering, you can start thinking about the food. Then we got some awesome fruits and juicy and so sweet that once in a while we stop to taste some more. And finally we got the Toblerones, which are bars of milk chocolate with almonds, and the super addictive Turrones, which are bars of honey with almond and comes from Alicante which is a province in Spain that does this exquisite delicatessen.

We all went back to her home where she had everything ready to put it into the Puerco al Caldero (Flamed Pork), which is very typical from Pauline’s family. You take the entire pork (head and all) put all the raw condiments and other spices and wrapped it all inside a homemade oven that is called caldero and then in very slow cooking you let it go until is ready to eat!

After that, Pauline and the gang all went for a little sightseeing in Barca as the natives call Barcelona.

First stop, since Alejandra is a major photography nuts, we went to the Picasso Museum. One thing you’ll notice is that the house doesn’t have the look of Picasso (which tends to be without form and box-y type) instead have the feel to a colonial stone house. Another thing that totally make me appreciate this more is the fact that they organized his art in chronological order, in this way you can see how crazy-genius he became thru the ages.
Posted by Rafi the Adventurer at 1:28 PM