The Eternal City - Part One 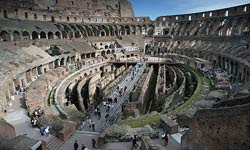 Alejandra and I are going steady and because of that we decided to take a trip in one of the most amazing cities in the world, Rome. I picked the city for its elegance, its food, and a major plus is that it gives Ms Hotness her ground to try new photography techniques. To say that this is city is incredibly beautiful is an understatement.

So we have plenty of time for ourselves, we decided to rent a car from Avis where we found a great discount. You have to realized that everything in Europe is expensive, so our economy car of choice was a Fiat Panda (which happens to look like a compact mini SUV) and we paid $619 for 10-days and unlimited mileage (or Kilometers as is the case here in Italy) We arrived at the airport which is called for Italy’s most celebrated genius Leonardo da Vinci, but Italians called it Feumicino that means little river and is also the name of a town that is adjacent to Rome. We went to the hotel and left our luggages, then we headed out to do a little stroll thru this incredible city. Smell the Italian air and hearing the sounds of its incredible friendly people. Our Fiat Panda is like a mini Honda CR-V, at first you can say that is like a sardines box, but once you enter is surprisingly roomier and very comfy.

The next day we headed to our first look of Italy. We went to the Borghese Gallery located in the Villa Borghese Pinciana a palace that belong to the nephew of Pope Paul V and was an avid collector of incredible pieces of art, one of them being Bernini who is more than handsomely represented. There’s painting and statues. Once we arrive, we never would have guess that we were near the center of the city of Rome, felt like you were in the outskirts, that tells you the love of the Italians for keeping their culture and their heritage. Inside, you’ll wished you had a thousand eyes cause there’s so many things to see. Alejandra was trying to get nice lightning effects with the statues, specially we loved the Venus that was sitting in a sofa-like chair naked from the waist up, Alejandra caught a nice light that made this statue look incredibly. Another painting that capture our attention was after we walked thru the staircase we looked into the ceiling and it has this painting of a roman god of some sorts and it was with such realism that looked very 3-D. Alejandra was taking snapshots after snapshots and she was like pointing to certain things in the painting that were simply amazing the detail.
Posted by Rafi the Adventurer at 6:05 PM