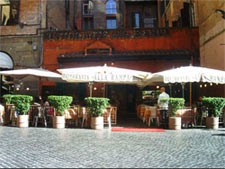 From there, we headed to the center of the city where it was awaiting one of a lifetime experiences. Alejandra and I are major Russell Crowe Gladiator movie. She likes the man, I like the action, it was a great way to compromise, she is happy and I am happy. So with that, we went thru the tour of the coliseum. Pictures doesn’t do justice to how big and enormous the place is. Once inside, it is like a huge maze. Corridors and other spectacular trams that left you knowing why this place holds fascination into people. Alejandra took pictures of the area where the emperors do the first thumbs up or down, they beat up the movie critic Ebert for about several centuries more! She also shot pictures of where the romans kept the animals inside the coliseum, and they told us about how the emperor treated the Christians and how they put them to death in the pit with the animals! To be there, you appreciate more the level of authenticity that the makers of the movie had, true it has certain free licenses but well its Hollywood but for the most part the guide told us that they got it right.

The sun was setting and they started to turn on the lights on the coliseum, which gave her the ultimate shot! And let me tell you, she has a great eye for picking the right angle for her photos! What a great shot that was! We were looking for the Italian food experience and our guide who was a very flamboyant guy if you know what I mean, the little bastard was flirting to all the girls including to Alejandra, but is a good thing she has that NY upbringing and can kick someone’s behind at any time giving! At the end, he did us good by recommending this awesome Ristorante as Italians called Restaurants. The Ristorante Alla Rampa was located near the coliseum, so it was an easy drive in our Fiat. So, Alejandra got the home-made ravioli with fresh fish and I got the spaghetti with clams. We gave each other a little bit of our plates and let me tell you both were totally to die for, we were licking our fingers cause it was that good!

We stroll by the city and the sights that we’ll see tomorrow. This is an amazing city and we ended up unintentionally in front of the Trevi Fountain. It was light up and there were tourists passing by and taking shots of the fountain at night. Then we flick three coins into the fountain, which in the traditional legend says that it will lead to a marriage, to that Alejandra sort of winked and smiled. We’ll see more of the fountain, but we were left totally enthralled with the looked of the fountain and the bright orange colors of the light fixture.

This first day in this amazing city left us tire but very happy cause this city was indeed very picturesque and colorful, plus its culture is friendly and you cannot have a straight face with the Italians cause they surely can make you laugh.
Posted by Rafi the Adventurer at 2:13 PM