Spain is the Game - Part Two

The second half started and it took merely like 20 minutes for Pedro to get the second goal, it wasn’t as colorful as the other one by Messi, but it was alright. As the time tick away, the people started to sense that the team was losing and only people from Barcelona stayed. At the end, it was like a college game with people singing and some people from Barcelona showing the Catalan flag, which is different from the Spaniard one. All in all, it was a festive game and one we’ll remember. Poor Martin had his head down. I was a little intelligent and got a Messi shirt at the half, of course, I had to hide my Real Madrid shirt and hope no one saw me, fear for my life if you know what I mean! 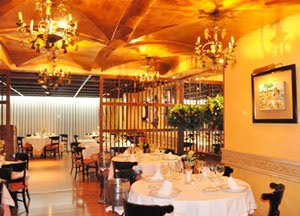 So we drove in our Audi following those two crazies of Martin and Pauline thru all the mazes of the Madrid landscape. Finally, we got into this lovely area and found our restaurant called Casa de Valencia, which is also the name of a city here in Spain. When we got out from the car, Martin and Pauline were totally telling us that they didn’t want us to leave without tasting the best Paella in town! We were seated extremely fast, and the place looks like a mix of hole-in-the-wall and nice restaurant, there was a lot of families and couples here and there, and the colors were between whites and reds with the waiters dressed in the usual black and whites. Martin ordered a paella mixta (this one goes with chicken and seafood and some chorizo here and there). Suddenly, like in about 30minutes tops we heard a few servers saying “walking in”, and I couldn’t believe it, they were carrying this huge rice container and smell so good. Ok, to say that we didn’t have our mouth watering was an understatement! It was put in the middle of the table and everyone started to dig in. if you come to Madrid, don’t forget to come to Casa de Valencia, we had to drive around thru the Universidad Politecnica de Madrid and calle Arguelles with Paseo Pintor Rosales, it was a drive but worth every penny and every hassle from the traffic, which tends to be like New York City bumper to bumper.

During the time we were in either Madrid and Barcelona, we had sucha fun time. One thing that we’ll keep in our memories is the awesome adventures we had with our dear friends Martin and Pauline. It was a good thing we rented out that car from RentalCarMomma cause at the same time we saved money on our trip, which since it was Europe was indeed a bit expensive.
Posted by Rafi the Adventurer at 7:08 PM