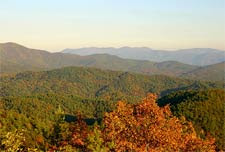 We go to a local church here in the Central Florida area and they decided to take a trip up to Cahutta for a mission’s trip. You see, there is this great summer camp for kids up in the mountains… way up in the mountains of Georgia. In fact we were told that having cell phone reception would be unlikely and that they didn’t have internet up on the hill. Which meant to the average Floridian we were “huffing it” like a rich camping experience.

Now when we originally set out there was a lot of dispute about whose cars we should take. We were supposed to be taking nearly twenty volunteers to do some good manual labor, but as the date arrived a variety of complications kept the others from going, so it ended up just being ten of us. We originally were going to take a Honda CRV and two small cars, but when I suggest we take a rental car it was quickly shot down because of the price. But I told them we could do it for cheaper than what they had looked at and when I showed them the prices on Rentalcarmomma.com for a minivan we were in business. We got the car the day before and loaded it up with bags and food. Then as a duo we pulled out in a Dodge Caravan from Budget and the Honda CRV closely behind with a trailer full of tools.

The trip was comfortable with the van full of people and the CRV full of equipment. We fit four in the CRV and six in the van, even though it could hold seven. That meant that no one had to sit up right next to another person, so it was comfortable the whole way. When we arrived at night we made our way through the winding roads, where you would have plenty of time to contemplate how you had spent your life if you were to accidently swerve off the edge. Once we were at what seemed liked the highest point in the mountains we saw the sign that reluctantly told us that our eleven hour trip had come to an end.

They had us all staying in a four story cabin that they usually use for campers. There was two sides, when campers are there they either split it by gender or just fill the whole place up with girls or boys, depending on how the camp sign ups go. We had a fantastic meal that night and then went to bed so we could get up early and get to work. I mean the whole reason for our being there was to clean up the camp for the summer.

We woke up the next day to our leader screaming “Get to work maggots!” at roughly five in the morning. We were downstairs and eating quickly and then we were pushed out the door at six o’clock to start our work day. Our leader kept saying that he had missed his calling; he jovially told us that he could have been a drill sergeant.
Posted by Highlander at 6:15 PM

Email ThisBlogThis!Share to TwitterShare to FacebookShare to Pinterest
Labels: 1, cahutta, georgia, one, part