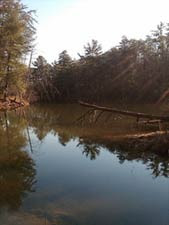 The first two days we were there they had us putting up nets and basketball hoops. At the top of the mountain they had an asphalt basketball court that needed real hoops and a protective netting to go around it. They told us that when a basketball got loose on a mountain that it only went a short ways before you realized that it wasn’t coming back. So to help with their runaway basketball problem we were given several large four by four poles, shovels, concrete and a weatherproof net.

Normally a job like this would take less than a day. Dig ten or fifteen holes, concrete the rods in and then hang the net. Unfortunately about four inches under the red Georgia clay we hit solid stone. Worst of all this wasn’t the kind of stone that you just dig out and throw in the pile… no this was part of the mountain. We grabbed two sixteen pound steel rods and started to smash our way through the rock. By the end of the first day we had literally hewed out several 2 foot deep holes out of solid stone. Shortly after we had cemented the rods in place and hung the net around the court.

All this time we fought the gnats, flies, other insects and poison ivy that we were not prepared for. Luckily after we got our bug spray out and wore pants the rest of the trip we effectively avoided those challenges.

Later they had us surround some freshly made paintball courses that they had spent last summer making. They wanted to ensure that no paintballs found their way off the course and into unsuspecting kids. It took us only a couple of hours to put the net in, because luckily there was no rock to carve out of. Surprisingly enough the paintball courses they had made were very elaborate, with ditches, bunkers and even elevated platforms.

We went to bed slightly less than satisfied with such a slow start, after two days there was very little progress to see, two days and only two nets had been placed.
Posted by Highlander at 12:00 PM