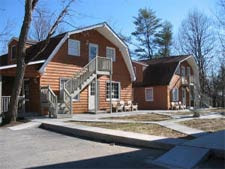 We woke up early the next morning to the now traditional “Get up maggots, its time for breakfast.” Strangely enough our leader had somehow found an air horn, and thought it was comical to blast it in door ways at 5am, so it was wise to be out of bed and downstairs as he suggested.

We ended up taking a variety of chainsaws up the side of the mountain that day to clear away trees. Since they own nearly a hundred and fifty acres of land they could have a team of workers on the side of the mountain all year round and they would never finish cleaning up the year’s wear and tear. So we ended up taking down nearly twenty dead trees as well as four or five large oaks to make way for a wooden staircase they planned to put in along the hillside in the near future.

The worst par about it all was that all the wood needed to make its way up hill instead of down. That meant throwing logs over your shoulder and walking up a steep incline. To make matters worse it had recently rained and just about everything had a fresh layer of water over top of it. We originally tried having one team pull up logs with a rope while the rest tied, but it was taking way to long. So we ended up just grabbing freshly cut logs and walking up the hill.

After a grueling day of work it finally seemed as if we were getting something done. We had a twelve foot high pile of logs and the cuts and bruises to prove it. They kept telling us that they were going to have a large bonfire when the wet season came… and here I thought it was the wet season.
Posted by Highlander at 3:16 PM