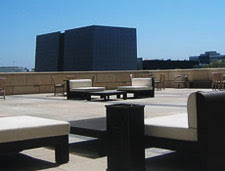 My wife works for a high end law firm and she somehow acquired a lot of the traveling responsibilities around the office. Whenever there is a seminar or an important even that the office needs to be present for she ends up with the job of going. We never really complain because they usually set her up in fantastic hotels and resorts. Why its not a big deal is because I usually convince her into letting me tag along.

So when my wife was asked to go on a trip to Francisco she said “sure” as if she had a choice. So I asked when she was going and if they booked her flight already. We ended up flying on the same plane just different rows but we got there fine. When we got out of the plane and into the terminal we followed the signs to car rental and we were in an E-Z Rent a Car in like fifteen minutes. We got a Ford Escape, we weren’t being real picky because we were only going to be there a few days, so we just asked what was available and chose the one that interested us most.

The Saint Regis resort was incredible. We had a room three stories above the first courtyard balcony. Their balconies were incredible, I mean pools, spas, great views, plenty of room to spread out and tons of tables to eat at. In fact we spent most of our time on the balcony, just looking out over the city. They even have a nine thousand square foot spa, it was insane!

We saw some of the sights in San Francisco, like the Golden Gate Bridge, but the hotel was definitely the best. The rooms were fantastic, the service was even better; we even had seafood in our bed. It was the perfect weekend getaway; I would do it again in a heartbeat!
Posted by Highlander at 5:27 PM