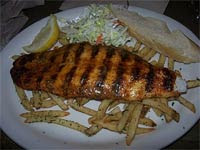 So when they suggested that we were going deep sea fishing on a large fishing boat they lied. We ended up on something that could only be described as a yacht. I mean this thing was enormous! We woke up early and got to the docks just in time to meet our captain before sailing away. We also found out that we wouldn’t be the only ones on the boat. Since it was so large there were two other groups. The captain said they can have up to fifteen people on board at a time, including the crew. Since there were three in the crew I guess they can fit twelve people. Either way, the other guys on board pretty much kept to themselves.

Anyway we sailed out of the “harbor” and went straight into the depths of the Gulf of Mexico. It took us almost two hours to get out to deep enough water for them to consider it “deep sea” fishing. But I am not complaining, because this massive yacht had a bar underneath, and of course they were already cooking up some mean burgers and hot dogs. Don’t ask me why we ate lunch at ten o clock. But when you wake up at 5:30 to get to the docks on time I was read to eat.

Now I am sure you are all wondering about how the fishing is in the Gulf. Well its nothing like the Atlantic. The captain said the waters were choppy because of all the hurricanes in the Atlantic, but even with choppy waters the waves never rose over a foot out of the water. So it felt like fishing on a giant lake the entire time. But that didn’t deter us, we caught all kinds of fish, mostly dolphin and snook with the occasional king fish. Some were big some were small but the biggest had to have been one of the king fishes that was probably four and a half feet long.

The best part about the trip was that they fired up the grill on the way back to shore and we had two of our dolphin and two of our snook right there on the spot. Ever wondered what a fish tasted like just an hour after being pulled from the water? Delicious.
Posted by Highlander at 5:11 PM