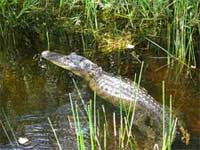 So my family and I decided we wanted to revisit the Everglades. We haven’t been down there since we first moved here and were all guns ho for visiting all of Florida’s major attractions. However at the time when we did it we took a tour that started in Orlando, so you can imagine we had a very short time to meander around. In fact we spent about two hours walking around the edges and out on the boardwalks… we never actually got to go out on a real “tour.”

So we decided that we would get to the Everglades as quickly as possible before the kids had to go back to school. We found a sweet deal on Rav 4 from Hertz on RentalCarMomma and off we were on our way to the Glades. We stayed at a Marriot for the night and decided we would get a head start in the morning. We made plans to go on an airboat tour the first thing in the morning. We got the location of the place from a pamphlet down in the Marriot’s lobby.

Early the next morning we were in a massive boat with ten other people, all dawning the bright red headset so the roar of the engine didn’t fry our ear drums. I never realized how big the Everglades were until our guide stopped after about a half hour of driving to show us a few alligators. He made a comment about how we were only a few miles in despite the long drive, because there really is no straight path through the Glades. So naturally I asked him how large the Everglades were and he said that while the Glades were constantly growing and shrinking each year it was currently over a million acres. That means I could spend a lifetime in here and never see it all.

So if you are looking to explore the Florida Wildlife in Florida then you need to visit the Everglades. I would suggest taking an airboat tour because it really is the best option out there. You get to see all the great wildlife in a short period of time, plus the guides always know where they are going and the animal “hot spots.”

Posted by Highlander at 6:02 PM

Email ThisBlogThis!Share to TwitterShare to FacebookShare to Pinterest
Labels: the florida everglades