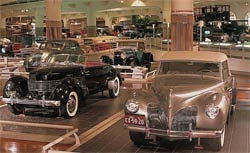 So, it has been quite a while that Ms Hotness Alejandra and i went out on vacation. This time, we wanted to experience a little bit of North Central part of the country. We decided to go to Detroit, Michigan, which is home to the Tigers in baseball, the unbeaten Lions in NFL, and Cup-crazy Red Wings in NHL. Plus, there's that little thing called the place where the automobile was born!

After arriving into the airport, we headed to the Thrifty booth to pickup our car. Since Alejandra is a major "green" savvy woman, we got a Ford Focus, which is a fuel saving car! As usual, we both like using this nifty website, rentalcarmomma, which sounds funny but definitely got major discounts on our car. We arrived at the hotel and we settle in, plus rest is good cause we were very much hassled with the change of planes and the trip.

Since we both love history, we decided to first visit the museums, and there's two that sparked our attention:

the first one was the HENRY FORD MUSEUM where they have very good exhibits one about the presidential vehicles featuring vehicles that drove presidents kennedy, Franklin D. Roosevelt, Ronald Reagan, Ike (Dwight Eisenhower); also the heroes of the sky exhibit that has the Brother's Wright replica airplane, 1926 Fokker Trimotor which was used by Richard Byrd the first who went flying to the North Pole, and a replica of the plane Lindbergh flew, the Spirit of St. Louis. the one that impressed us was the With liberty and justice for all exhibit that showcase anything from the civil rights starting from the beginning of the country til present day. Incredible with the rosa park bus, the chest and camp bed that President George Washington use, a copy of the Declaration of Independence, a model T that shows how people wanted to allowed women to vote, and much more.

the second one was the MOTOWN HISTORICAL MUSEUM that features the story of Motown sound around the 1960s. Within the confines of this building you can find equipment and things used by the greatest singers of our era. Alejandra and I are majored Marvin Gaye fans, plus we get our dosis of Jackson 5, and well, Alejandra can sing at the top of her lungs every single time Aretha sings "Respect", and i love Stevie Wonder, so we like the oldies Motown sound! They were having a nice exhibit about Esther Gordy Edwards who was Berry Gordy's sister and die this year at age 91.

Another thing that Ms Hotness Alejandra and i share is that we both love sports. it is without saying that prior to getting here, we bought tickets to some sports venue.
Posted by Rafi the Adventurer at 6:04 PM