Dos Equis by the moon light 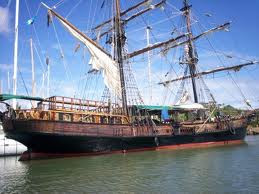 So the big day was coming up that my friends and I have been planning for, for a long time. We are going on a night time camping and fishing trip down by Sebastian Inlet. My buddy Jerry has a boat so we all are going to pile in and take a night time river adventure and see where we end up. We had a cooler packed full of the freshest brew you can think of consisting of Bud Light, Bud Light Lime, Heineken, Strong Bow and of course Dos Equis! We only mess with the best when it comes to beer. You can keep your Pabst Blue Ribbon and Natural Light for yourself. We straight hatin' on this side! So we got our cooler and some good to grub on when we get the munchies real quick and we set off on our adventure. We start at about 5 o clock on a Sunday and tow the boat out to the inlet from Kissimmee. It took us about an hour and a half to get there so it was about 6:30 or 7 o' clock by the time we actually set off on the river. We started off by fishing some of the islands that the river had to offer. We started cracking open some of that cold brew and we had a good time. We had some run in's with the big fish that the river had to offer, but they were nothing that a drunken man couldn't handle. I accidentaly stabbed our friend Cesar with a catfish. It was hilarious. If he wasn't drunk he probably would have cried..What a shame.

The night carried on and we finally found a island suitable for us to set up camp. We had a few guns with us so we had to cap them off and get a little wild. Worse case scenario we burn the island down and we move to another one, so what the heck right? Anyway the island didn't catch on fire so all was well. I slowly enjoyed all the Dos Equis That I can handle while taking in the bright moon light. It was a great opportunity to enjoy some much needed relaxation. We setup a camp fire and started roasting some of the fish we caught earlier. Jerry was the slaughter expert in house of the night. He gutted all the fish and made sure they were fire ready while Brian kept a close watch on the flame. The whole time Brock and Ivan were shooting the handguns into a sand pile on the other side of the island, seeing who could hit the targets. It was a real good time and after not too long we had some strangers on a boat come up and see what we were doing and they were saying how we were trespassing and what not. So i told them to go to hell basically and we didn't see them again. They were strange bungalo music listening folk that smelled like cabbage anyway. So it was a win, win scenario to say the least. We party rocked to sun break and the trip was a good time. We never fell asleep the whole time so there was no point in bringing our sleeping gear at all, but hey what are you going to do?
Posted by JerkeyBoyz at 1:16 PM