My cousin is 3 weeks away from his wedding and is extremely anxious to get it over with so a few of the fellas figured out how we can get him relaxed and calm before the big day……..Bachelor Party time! That’s right! The theme song and the theme name for that night was Wild Boy. If anyone has heard of Machine Gun Kelly then you know what I mean. I was in charge of transportation so after doing a quick head count if figured we will need a limo but not just any limo, I went to the RentalCarMomma and I was able to get a really good deal on a party limo bus and it had all the bells and whistles for our shin dig. The price was ridiculous I mean considering the fact that we were rolling 20 deep we got the party bus for 7 hours for $900.00.

So once we squared away the details of the wild boy ride we now concentrated on where we wanted to take my cousin Sosa for the night and of course being that us boys like doing bad things we said that we needed to take him to Tampa Florida and stop at several night clubs including a Gentleman’s night club. Sosa had no idea what we had in store for him at all, the entire week he kept telling me how he wanted to do something fun before his wedding and he had no clue what was coming the very next day.

The day of the party a few of us went to pick him up from his house and take him to get a haircut and of course we as well got cuts then we went to the mall to get some gear for the night so we could look so fresh and so clean and this fool still had no idea what was going on. Once we got done we took him back home and we told him that he needs to be ready because we had plans for the night to grab some drinks. Everyone already knew what time to meet at my cousins crib our Limo bus driver was going to be there at 10p.m. sharp so we asked that everyone arrive at Sosa’s house by 9:30p.m. I got to his house first only because I needed to stop by the liquor store and get all the Big Boy Drinks because the party bus doesn’t supply the drinks. So once I got in his house with all the bottles he had a curious look on his face and then he asked me “Bro I thought we was going out for drinks” and I told him “yeah we are” and as soon as I said that all the fellas rolled in at the same time the party bus parked in front of his crib and by that time my boy had a smile that went from cheek to cheek. 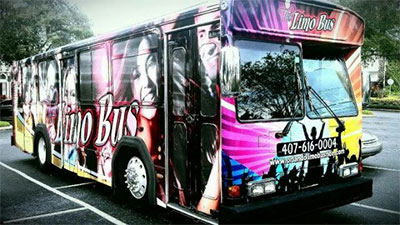 I myself had the only cool-aid smile because I wasn’t expecting what I saw, I mean this bus was pimped out to the max it had cool customized Graffiti throughout the exterior parts of the bus. I was the first one in the bus and that was because I had to put the drinks in the bar,,,,,,yes you heard it correctly this bad boy had a liquor bar and it had wooden floors throughout the bus it also had customized leather seats, 12 47inch flat screen t.v.’s and fully loaded surround sound with iPod connection for the tunes oh and I almost forgot the customized strobe lights and 2 private bathrooms for him and her LOL!!!

Once I put the bottles to chill I put in some music and I told the driver to open the door and let everyone in and they all rushed inside and you could see it in everyone’s face that they could not believe what they were seeing, to say that it was off the chain would be an understatement this party bus was official like the bone gristle. As soon as we drove off my cousin pulled me aside and he told me that this was the best thing anyone has ever done and told him to shut up and have a lot of drinks because where we were heading you definitely be on your Wild Boy Status and party’d all night long rockin the song by Machine Gun Kelly – “ Ima Wild Boy, Ima-Ima Wild Boy”
Posted by Allright, Allright, Alllll-Riiiight! at 3:56 PM